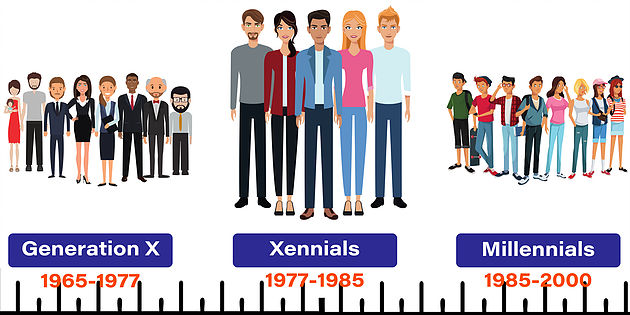 You’ve heard about Generation X (1961 – 1981) and Millennials (1981 – 1996), but it turns out there’s another micro-generation imbedded within the two: Xennials. This new term describes people born between 1977 – 1985. They are different to the generations before and after them, partly because of the huge shift in technology that occurred during a crucial stage in their lives.

Xennials were in a unique position of having an analogue childhood but a digital adulthood. They are either the oldest Millennials or the youngest Gen Xers, but many don’t feel a sense of belonging with either category. They grew up with toys without batteries, limited seatbelt restrictions and minimal adult supervision. As they entered their teens, they were the last to get their license immediately after turning sixteen, video games were just becoming 3D in resolution and the first movie DVDs were becoming available to rent at your local Blockbuster. By the time Xennials were in their early to mid-20s, Apple introduced their first Iphone, music was being purchased and downloaded through the internet, and social media platforms were becoming the communication norm. Gen Xers were forced to adopt this new lifestyle whereas younger Millennials grew up in it.

Some of the nostalgic trends that identify a Xennial include:

What Separates Xennials from Millennials?

Generation boundaries can often be fuzzy. What are the clear, evident differences between the hybrid Xennial generation and the progressive Millennials?

Xennials have greater experience developing organic relationships. Many in corporate America call them the “bridge between the old and new generations” – having the skills to communicate effectively with the older generation but adulthood experiences to engage with Millennials.   Generally speaking, Generation Xers had no choice but to look someone in the eye and introduce themselves whereas a Millennial has the freedom to find your Facebook profile and send a message. Xennials typically have strong communications skills to engage all generations. It is possible that Xennials will be the ones who solve all the problems of the world – they hear the remarks from their parents and grandparents about how America’s youth are wasting their lives and but also understand (just like all Millennials) the value of current technological and cultural norms when utilized properly.

Xennials have also grown up in a very interesting time in our country’s history. Most were close to graduating or already graduated high school during 9/11 and determined the real ramifications it was going to have on their lives. Younger Millennials can hardly remember what they were doing when the tragedy occurred. Many were also already in the workforce or just graduated college when the recession hit. Interestingly, some suggest that Xennials may have been hit the hardest by the recession because of a combination of student-loan debt and job losses, resulting in greater work ethic and company loyalty.

Finally, Xennials also inhibit lifestyle habits from both their older and younger peers. Like most generations, Xennials have made social media part of their everyday lives, but they still want to watch the news on TV or read the newspaper. Although most learned the art of texting by their 20s, at the end of the day they still remember the power of a handwritten note (in cursive!) Ready for the moment when someone asks you for a couple dollars, Xennials tend to still carry wallets and money clips instead of relying on Venmo, Apple Pay and minimalist wallets that only hold credit cards. They are also more likely to go into a meeting with a laptop or tablet but take meeting notes by pen and paper.

What does it all mean?

The sense of having known a world without Instagram filters perhaps explains why ‘80s kids regularly chafe at being called the m-word. Millennials are frequently caricatured as entitled, Snapchat-addicted snowflakes on op-ed pages which makes the term seem derogatory.  Xennials possess a unique mix of traditional character values mixed with forward thinking technology savvy.  Businesses who recognize this will undoubtedly find success capitalizing on new opportunities into targeted marketing, business strategy and brand segmentation for this new micro generation.

Take this survey powered by surveymonkey.com. Create your own surveys for free.

Become a virtual respondent at Eastcoast Research. Visit the link